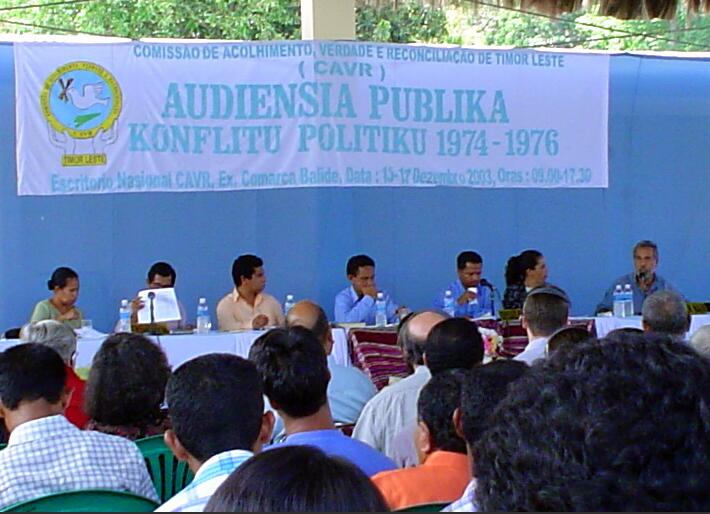 Dealing with the burdened past: truth, reconciliation, law enforcement

Serious human rights violations were committed in East Timor during the Indonesian occupation (1975-1999). With the establishment of the UNTAET (United Nations Transitional Administration in East Timor) in October 1999, the United Nations Security Council (UN) demanded that those responsible for the violence should be brought to justice. To avert an international tribunal, Indonesia set up an ad hoc human rights court in Jakarta, and UNTAET established a special court and prosecution in East Timor. With broad social and political support, the Reception, Truth and Reconciliation Commission (Comissão de Acolhimento, Verdade e Reconciliação de Timor Leste, CAVR) took part in East Timor in 2002their work on. Law enforcement and the truth commission should complement each other. While non-governmental organizations and victims’ associations continue to demand an international tribunal, the presidents of Indonesia and East Timor set up a Truth and Friendship Commission (CTF) on a bilateral level in December 2004, ultimately to put a stop to further criminal prosecutions and to look ahead.

The ad hoc human rights court was unwilling to hold those primarily responsible for the crimes accountable. In Jakarta, all of the accused were ultimately acquitted. And in Timor-Leste none of the perpetrators who have been sentenced to long prison terms is no longer in prison. They were released through the president’s amnesty. The Dili Special Court was unable to bring the Indonesian military and politicians, who bear the greatest criminal responsibility, to justice. The law enforcement chapter is for the current governments in Indonesia and Timor-Leste with the handover of the final report of the friendship commission. The United Nations Security Council has repeatedly criticized the policy of impunity and political interference in the judiciary. Ultimately, however, the United Nations failed from the outset to give the criminal court in Timor-Leste the support it needed.

According to ehealthfacts, Timor-Leste’s National Truth Commission (CAVR) was tasked with investigating human rights crimes committed between April 1974 and the withdrawal of the Indonesian military in October 1999. The concept of reconciliation processes was unique in the communities: a local dispute settlement procedure formed the basis and only perpetrators of less serious crimes were permitted. With the national hearings, CAVR helped society to enable victims to recognize their suffering. Perpetrators were able to find their way back into society. The commission recorded more than 7,500 testimonies from victims, witnesses and perpetrators about human rights violations and carried out over 1,400 reconciliation processes. In October 2005 the commission handed over its 2,500-page final report “Chega!” (“Enough!” Port.) To the President.

After a long struggle and a few attempts, in September 2010 Parliament approved bills to set up a memorial institute and a program of reparations. A department is also planned to help the countless families in Timor-Leste to find out the whereabouts of their relatives who disappeared during the 1975-1999 conflict. This could have met the very essential needs of the victims, but the consultations on implementation have been on hold since then: Blocked by political forces who first want to ensure that the veterans are taken care of first before turning to the civilian victims. 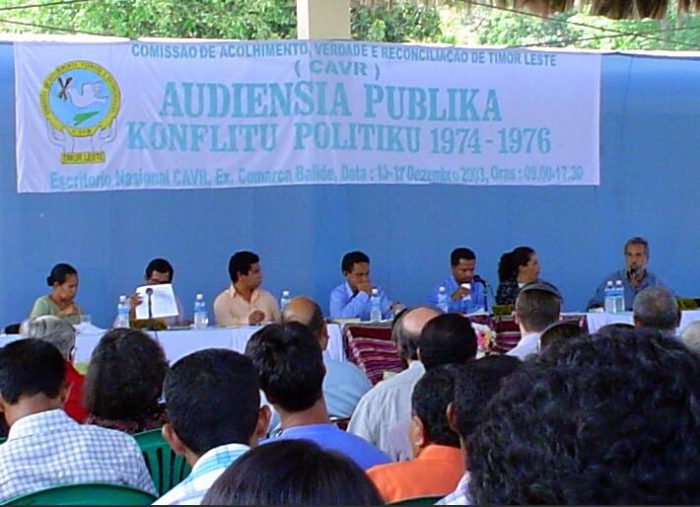 After years of stagnation, Prime Minister Rui de Araujo (2015 – 2017) showed initiative and set up a working group in May 2016 to implement the recommendations of the Truth Commission CAVR. The Council of Ministers has since passed a decree establishing a successor to the National Truth and Reconciliation Commission (CAVR) and the bilateral Truth and Friendship Commission between Timor-Leste and Indonesia (CTF). This is a great achievement for the civil society organizations in Timor-Leste who work for justice for the victims. On July 17, 2017, shortly before the end of the legislative period, Prime Minister Rui de Araújo (2015-2017) opened the Centro Nacional “Chega! – Da Memória à Esperança! (CNC). The mandate of the center includes remembrance and educational work on the conflict (1974-1999) as well as the promotion of solidarity and reconciliation. However, no program of reparations is planned. The question of justice, recognition and reparations remains one of the controversial political issues in Timor-Leste.

In the past two years, the Centro Nacional “Chega!” (CNC) has clearly demonstrated its tenacity and innovative strength in disseminating the final report of the Truth Commission, concluded the human rights organization AJAR Timor-Leste on July 17, 2019. It contributed to Preserving memory and promoting knowledge of history. Some progress had also been made in the area of ​​rehabilitation and healing of survivors, but more was urgently needed: CNC should take immediate action to provide assistance to victims that have been neglected for more than a decade. The director of AJAR in Timor-Leste, José Luis de Oliveira, reflected: “Remembering and recognizing the suffering of the victims is an important basis for building our nation. But there is an urgent need for continuous care and support for those in need We are strengthening our national commitment to the fundamental values of human rights. ”

So far, the governments of Timor-Leste and Indonesia have hardly made any effort to implement recommendations of the bilateral Truth and Friendship Commission (CTF). This concerns among other things the question of the whereabouts of the violently disappeared and the approx. 4,000 children who were deported to Indonesia. Families looking for their relatives receive support through civil society initiatives: An initial organized reunification (with the participation of the state institutions Komnas HAM (Human Rights Commission in Indonesia) & the Provedoria de Direitos Humanos e Justiça, PDHJ in Timor-Leste) of family members in cooperation with human rights organizations took place in May 2015. The organization Asia Justice and Rights (AJAR), based in Jakarta, Indonesia, and ACbit in Timor-Leste are coordinating further mergers. In 2014 the Timor-Leste National Alliance for an International Tribunal submitted a report on Indonesia to the UN Committee on the Rights of the Child. In it the alliance calls on the UN body to demand that Indonesia implement the recommendations of the CTF and to set up a commission for the disappeared people. She reiterated this demand during the state visit by Indonesian President Joko Widodo to Timor-Leste on January 26, 2016.