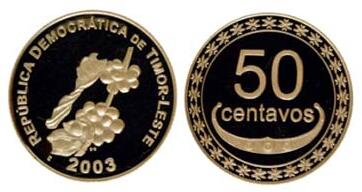 Climate (for capital): tropical, hot all year round

The national currency of Timor-Leste is the US dollar. There are also East Timorese coins in circulation, the centavos, which are used according to the cent. Timor-Leste’s central bank, the Banco Central de Timor-Leste, emerged by law on September 13, 2011 from the Bank Payment Authority (BPA, established in 2001 by the United Nations Interim Administration, UNTAET).

There are five banks in Dili, all of which have ATMs: the Timorese Banco Nacional de Comercio Timor-Leste, the Australian ANZ Bank, the Portuguese Banco Nacional Ultramarino (BNU Timor) and the Indonesian banks Mandiri and BRI. Visa and Cirrus are accepted. It is no longer possible to withdraw money with the EC Maestro card. There are also ATMs in the supermarkets in Dili, which are geared towards international customers. Together with Timor Telecom, BNU Timor is testing an offer for mobile banking in Dili, Baucau, Lautem and Ermera.

The central bank announced the start of the implementation phase for an electronic banking system in May 2017. The system connects the five commercial banks operating in the country. It allows cardholders to withdraw money from all machines. The network is also to be integrated with the three cellular networks to enable a range of payment services via smartphones and telephones.

The cost of living in Timor-Leste, especially in the capital Dili, is high.

Diak ka la’e? – How are you? Communicating in Timor-Leste is not difficult. A few tetum phrases are easy to learn and open hearts and doors. Tetum is spoken almost everywhere, Indonesian is also widespread and anyone who has a lot to do with government agencies will need Portuguese.

The dictionaries Deutsch-Tetum / Disionáriu Alemaun-Tetun and Tetum-Deutsch / Disionáriu Tetun-Alemaun, published by regiospectra Verlag 2020, are the first extensive works of their kind. All Tetum words are listed in the official standard spelling of the National Institute for Linguistics. The vocabulary includes around 13,000 Tetum and more than 15,000 German terms.

The possibilities of medical carein Timor-Leste are still limited. There are only hospitals in Dili (Guido Valaderes National Hospital, telephone number 331-1088) and Baucau, in the rural regions health stations predominate. There are two private clinics in Dili (Aspen Private Clinic Healthcare Services Tel. 331-1517, Stamford Medical Tel. 331-0141). In addition to adequate health insurance abroad, repatriation insurance is recommended. Malaria and dengue fever are common. Appropriate precaution and prophylaxis are advisable. Japanese encephalitis is also common. Common medications are readily available in Dili, while obtaining outside of Dilis can be difficult. The chronically ill should bring the necessary medication with them. Water is only suitable for drinking when it has been boiled or filtered. Water in plastic bottles is widely available.Tropical Medicine Center. The medical information, which is constantly updated by the Federal Foreign Office, the travel medical information service Fit for Travel and the country website of the Center for Travel Medicine are also very helpful.

According to pharmacylib, the living conditions in East Timor are simple, which is a growing urban-rural divide is. The strong presence of international forces since the independence vote in 1999 has been a magnet for business-minded people from all over the world. You have opened numerous restaurants, supermarkets and hotels in Dili as well as the first shopping mall, the Timor Plaza. Many service companies are also in foreign hands. The prices have risen accordingly.

In addition, there are local markets in all of the larger towns and the farmers also sell fruit and vegetables along the roadside. East Timorese cuisine is simple and influenced by both Portuguese and Indonesian. Rice, cassava, sweet potatoes, corn, and grain are staple foods. Items for everyday use are also readily available in rural areas. International press and books, on the other hand, are rarely on offer. There are several public libraries. A visit to the Xanana Reading Room in Dili is also worthwhile.

Renting living space is possible without any problems, in all related questions (rent, location, security, neighborhood, furnishings) it is best to contact the project partner. A list of public holidays is published annually by the government. Authorities are usually open from 8:00 a.m. to 12:00 p.m. and 1:00 p.m. to 5:00 p.m.

Before entering the country, the general safety instructions from the Federal Foreign Office must be observed. The security situation in Timor-Leste is basically stable, but there is potential for conflict in view of social tensions. The non-governmental organization BELUN uses the Early Warning, Early Response (EWER) system to monitor the security situation in Timor-Leste and issues regular reports on this.

There are risks in road traffic. Night driving should be avoided. The crime rate is not very high and is limited to minor thefts and burglaries also occur (as a result of which a large market of security service providers has established itself in Dili). On March 1, 2013, the government introduced the emergency number 115 for disasters (such as floods, fire, fallen trees, etc.). The general emergency number is 112, the police can also be reached on 7300-0112. If Corona is suspected, the number 119 should be dialed.