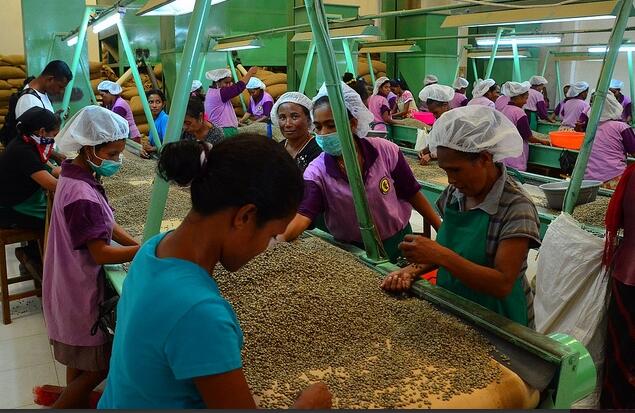 Half of the per capita income minus oil and gas revenues comes from government grants and investments. The country recorded a high growth rate of 7.8% in 2012. This was accompanied by a high inflation rate of 10.9%, which was reduced to around 2% in the following years from 2014 onwards. According to the World Bank, the growth rate for gross domestic product is 4.1% in 2019. A sustainable private sector has not yet emerged. The largest client is the state. As a result, the orders are often poorly executed, there is a lack of quality controls and a good procurement policy, and corruption and nepotism are also gaining ground. The politics of veterans favoring managed companies in the field of infrastructure programs for tenders has led to mismanagement and poor results in many places. 93% of the state budget comes from the Petroleum Fund. Critics warn of the resource curse.

Over a third of people – 41.8% – live below the poverty line (UNDP). The adult literacy rate is now 58.3% and the average life expectancy is 69.2 years. There is a shortage of skilled workers, especially managers. Many young people in particular – half of the residents of Timor-Leste are under 15 years old, two thirds are under 25 years of age – are unemployed and have no prospects for the future. The country not only has a high birth rate, but also a very high maternal and child mortality rate. Half of the children suffer from malnutrition. Timor-Leste is one of the countries with the highest prevalence of underweight in children under 5 years of age. Malaria, tuberculosis and diarrhea are the leading causes of death. According to the World Bank, more than 30% of the population still do not have secure access to clean water and only 22% of households are connected to the electricity grid. Despite programs for food security, which are also significantly supported by Germany and Europe, there are still periods of hunger in rural areas. Poverty, hunger and unemployment are neither helpful in the search for identity and national feeling, nor do they strengthen peace processes.

With 131st place out of 189 in the UNDP Human Development Report 2019, Timor-Leste is in the “Medium Human Development” category. But in the 2020 Global Hunger Index it ranks next to last (106 out of 107 countries) and the situation is considered “very serious”. (2019: 110th place out of 117 countries). The Roadmap for a Nutrition and Sustainable Agricultural Production in Timor-Leste by CEPAD Johns Hopkins University provides analysis and recommendations for the global Sustainable Development Goal 2 (SDG 2) “End hunger, achieve food security and better nutrition and promote sustainable agriculture”. To improve food security, the government presented a national strategic plan for the development of fish farms in 2012.

The government has taken up the country’s economic and social development as the main theme and has presented an ambitious National Development Plan. According to historyaah, the aim of the plan is to make Timor-Leste an upper middle-income country by 2030. Subdivided into the 4 segments “Social Capital, Infrastructure Development, Economic Development and Institution Framework”, goals for the future development of the country are set for 21 areas. With the plan, the government is also providing the donor community with guidance on the direction and priorities of development cooperation.

The local non-governmental organization La’o Hamutuk criticizes the plan as an unrealistic dream that is based too little on sustainable development, but all the more on a waste of resources on ambitious infrastructure projects in the petroleum industry, with processing in Timor-Leste still open under contract law. This is at the expense of education and health, poverty reduction and the promotion of private-sector development outside the oil sector.

Despite the National Development Plan and efforts by the government, Timor-Leste is, according to UNDP, the country in Southeast Asia that has had the greatest difficulty in achieving the Millennium Development Goals (MDGs). Even if the country did not achieve the goals by 2015, the efforts show a significant improvement in living conditions in many areas. Targets were achieved for 9 out of 29 indicators. These include gender equality, child mortality, maternal health and the fight against malaria and TB.

The fight against poverty, the promotion of economic development and education, investments in the expansion of infrastructure and the health system are the key to the development of the young country. They can only be implemented successfully with a functioning administration. There is still a lack of effective mid-level staff in the state administration; this is also a factor in the unequal urban-rural development. Because at the district and sub-district level the public administration is not yet sufficiently present, the state is still far removed from its citizens. Active lobbying by civil society, trade unions and social groups is also crucial for sustainable development.

In May 2017 the government presented the ” Roadmap for the implementation of the 2030 Agenda and the Sustainable Development Goals (SDGs)”, which is based on the National Development Plan. In 2018, the country met the criteria for upgrading from the category of “least developed countries” (LDCs). Due to economic and political challenges, the Committee for Development Policy of the United Nations has not recommended an upgrade at this point in time. This decision will be postponed until the next review of the CDP in 2021.