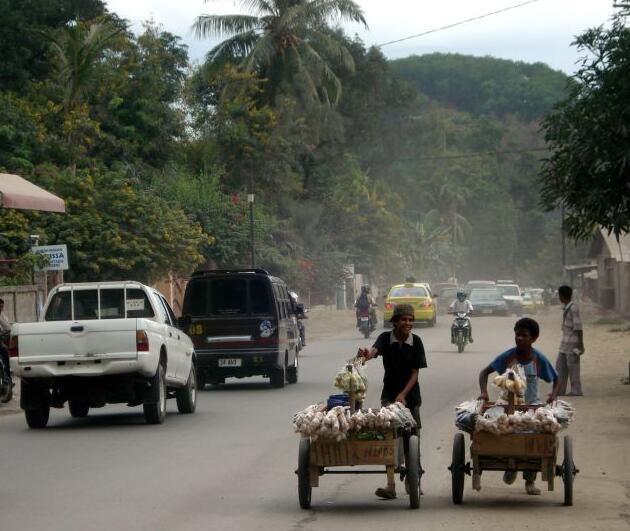 Because modernization is crucial to the development of the country. The Timor-Leste development plan for 2011 to 2030 sets ambitious goals for this purpose: commercial smallholders use modern agricultural production techniques to generate a food supply that is greater than demand. Surplus is exported. But so far there is no clear agricultural policy. According to the analysis, there is hardly any agreement among the many actors involved as to how the goals are to be achieved of the Asian Institute of Technology, which examined the training system on behalf of the Ministry of Agriculture in 2014. The current system is not in a position to “lay the foundations for an agriculture that creates income, promotes growth and reduces poverty.” Fundamental reforms are needed in the agricultural education system, conclude the analysis, and identify a number of priorities. such as participative and practice-oriented lessons with locally relevant learning content in an understandable language. Last but not least, the attractiveness of agriculture as a professional field must be increased.

Many young people are turning their backs on poverty in the hinterland and moving to the capital in search of work. But hope is only fulfilled for a few, because jobs are rare and unemployment, especially among young people, is correspondingly high. Since independence, international labor migration has been a way out of unemployment. The possibility of obtaining a Portuguese passport – Portugal’s government recognizes all East Timorese born before May 20, 2002 as citizens – opened the way for several thousands of migrant workers to the EU. Especially in the UK(approx. 16,000 to 20,000 migrants) and Ireland they hire themselves out as unskilled workers. The government of Timor-Leste offers its citizens migration opportunities to South Korea and as seasonal harvest workers to Australia. The possibility of posting domestic workers to Malaysia is also being discussed. The volume of transfers from migrant workers has now exceeded the value of coffee exports. An estimated $ 43 million was sent to Timor-Leste by migrants in 2017, with 63% of that money coming from the UK. The lack of job opportunities in Timor-Leste will increase the flow of migrants. This has a variety of effects on the country hand in hand. Labor migration is not a panacea for overcoming structural obstacles to development. Many would prefer to make a living in Timor-Leste, at home. But you no longer have a choice. Since the oil money filled the coffers of Timor-Leste, there has been a lack of determination within the political leadership to build a successful economy away from oil. But labor migration as a strategy for securing livelihoods does not necessarily lead to dependencies in Timor-Leste. Labor migration also contributes to economic diversification, according to initial studies show: Returned workers are building more solid houses, buying new farming and transportation equipment, sending children to school and siblings to university (often in Indonesia), buying phones to stay connected to the world, expanding family businesses, and investing in ritual gifts and barter promotions. This is anything but passive consumption.

According to franciscogardening, Timor-Leste has one of the youngest populations in the Asia-Pacific region. 74% of the population are under 34 years of age. It will be the young people who will determine Timor’s development in the near future, according to UNDP’s 2018 Human Development Report. “This relatively young population provides manpower, dynamism and energy for the potential change in the development of this young nation. However, much needs to be achieved in the areas of education, job creation, skills development and finance to realize this potential.”

The government of Timor-Leste is recommended to allocate 25% of the state budget to education and to carry out reforms so that young people can get involved in the internal market with better education. The report also presents data on wellbeing: Despite the problematic educational situation and the major economic challenges that Timor-Leste is faced with, three quarters of all 15- to 34-year-olds feel that they lead a healthy and satisfactory life. However, the criteria “education” and “participation in society” achieved the weakest survey values.

Timor-Leste exported goods worth $ 153.7 million in 2019. Coffee, which ends up in Indonesia, Canada, the United States, and Germany, accounts for $ 18.3 million of this. The main buyer of the high-quality Arabian Mocha coffee is the Starbucks chain, which has been selling an exclusive coffee line from Timor-Leste since September 2014. But the economic situation of the coffee farmers remains precarious: the coffee trees growing in the wild are over-aged and yield very little. Persistent dry seasons and exceptional rainfall – effects of climate change- make yields drop. The organic cultivation method is the unique selling point of East Timorese coffee. But the income that the farmers earn is often not enough for them and their families for the year. Coffee growing has benefited from government investment in more general infrastructure, including road construction. Fair trade organizations work with smaller cooperatives and offer processed coffee in Timor-Leste. Other export goods are nuts, vanilla, cocoa and cinnamon. In contrast, imports totaled 597 million US dollars in 2019. The main importer is Indonesia (37.9%), followed by Hong Kong (16.2%), Singapore (14.6%) and China (14.6%).

There are five banks and a number of microfinance institutions in Timor-Leste. Four of the banks are branches of foreign companies (Portugal, Australia, Indonesia). The state-owned Banco National de Comercio Timor-Leste (BNCTL) evolved from a state microfinance institute in 2011. East Timor’s supervisory authority, the Banco Central de Timor-Leste, emerged in 2011 from the Banking & Payments Authority of East Timor set up by the UN administration. It receives support from the IMF to improve its oversight function.