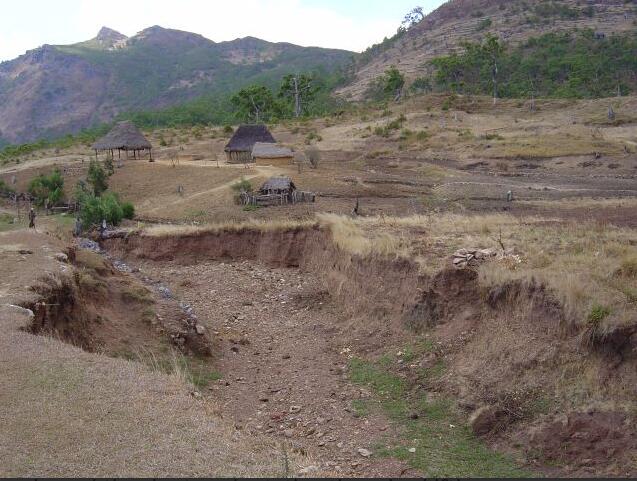 East Timor is about the size of Schleswig-Holstein and lies in the coral triangle of the Indo-Pacific Ocean, the most biodiverse marine region in the world. Charming coastal landscapes with mangroves and palm trees, eucalyptus and acacia forests, coffee plantations and an untouched, rugged mountain landscape characterize the natural area of the state, which has around 1.3 million residents.

In Germany, the Democratic Republic of Timor-Leste has continued to be called “East Timor”. In the local language Tetum the country is called “Timor Loro Sa’e” – the land of the rising sun.

The video documentaries Timor Leste – First Perception and Rai Doben provide an impressive introduction to the country. Basic data on Timor-Leste are provided by the CIA World-Factbook, the National Statistics Office of Timor-Leste (Direcção Nacional de Estatística – DNE) and the Statistic Division of the United Nations, the World Bank and the UNDP country profile. Furthermore the Foreign Office, the Federal Ministry for Economic Development and Cooperation (BMZ) and the Federal Statistical Office. Give a good overview of the structure and development of the young countryUNDP Timor Leste and the film contributions Momentum Timor-Leste of the United Nations.

12 years after Indonesia gained independence in 2014, Deutsche Welle reports in a video about the country’s arduous development. The articles “15 Years After Independence, Whatever Happened to East Timor?” and “Timor-Leste: 20 years in freedom”.

The new state also has many tasks to deal with in the area of the environment and sustainable development. In the last century, the deforestation of the coveted export product sandalwood and the shortened rotation times in shifting cultivation with slash and burn led to deforestation and erosion. In East Timor’s households, firewood is the main source of cooking, and the gathering and sale of firewood is an important source of income for people living in poverty, especially in times of food shortages. Agricultural policy at the time of the Indonesian occupation was not geared towards ecologically compatible measures. Today local knowledge threatens to get lost. Environmental organizations like Haburas and Permatil try to counteract this by creating awareness of environmental and ecological relationships.

Absent or too early onset, heavy rains lead to sensitive crop losses for subsistence farmers. Deforestation, erosion and desertification through overgrazing and thus falling yields are the consequences. Malnutrition and regular seasonal food shortages and starvation are the result. An estimated 70% of the country is severely degraded. Population growth, high levels of poverty and unemployment and the associated inadequate food supply counteract a move towards sustainable development. The problems are exacerbated by climate change. The Seeds of Life organization(Fini ba Moris) expects a temperature increase of 1.5 °C and 5 – 10% more rain in the coming decades. She documents climate change and works with the Ministry of Agriculture and Fisheries on the possible effects on the environment, agriculture and food security. The country is also affected by the El Nino weather phenomenon. This manifests itself in a delayed onset of the rainy season and a shifted dry season. In these years too little rain falls. For 100,000 to 150,000 people, the extreme drought means the risk of an acute food and livelihood crisis.

With the campaign “One Child, one mangrove / Labarik Ida, Ai-Parapa Ida”, UNDP and the Ministry of Agriculture and Fisheries address children and young people in schools and raise awareness of environmental problems, climate change and the protection of the mangroves.

Internationally, the country is involved in the fight against climate change in the V20, the Vulnerable Twenty Group of Ministers of Finance, which was founded in October 2015 in Peru at the Climate Vulnerable Forum (CVF). In April 2016, Timor-Leste signed the agreement of the UN climate conference in Paris (COP 21, November 30th – December 12th, 2015).

During the UN interim administration, the Environmental Protection Unit was set up, which, together with, for example, UNDP, carried out surveys and projects for the ecological improvement of the living space, as well as highlighting and providing information. According to areacodesexplorer, in the independent East Timor, this authority is now part of the Ministry of Economic Affairs and Development. In July 2012 the government passed a basic environmental law.

In addition to the environmental problems mentioned, there is also environmental pollution from power plants operated with heavy heating oil for power supply and the planned large-scale projects in the petrochemical sector on the south coast. The government often ignores petitions and protests from environmental and development organizations as well as from the affected population against large-scale projects and power plants. The local organization La’o Hamutuk has put together position papers and critical voices on the environment and sustainable development on its website.