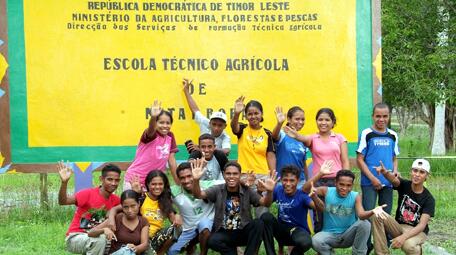 Since the UN interim administration in 1999, Timor-Leste has received funding from Germany within the framework of thematic and regional programs. German development cooperation on site is carried out on behalf of the BMZ by the Gesellschaft für Internationale Zusammenarbeit (GIZ), KfW and integrated CIM consultants.

At the beginning the support focused on emergency and refugee aid, food security and drinking water supply and then went on to a nationwide project in cooperation with the European Union (EU) to promote rural development (Second Rural Development Program for Timor-Leste, implemented by GIZ and the Ministry of Agriculture and Fisheries (MAF), 12/2006 – 12/2011). To increase rice yields, the program in the provinces of Bobonaro and Covalima used the environmentally friendly and “low-external input technology” method of the System of Rice Intensification (SRI).

The project “Sustainable use of agro-biodiversity to secure livelihood” began in 2013 with the participation of the EU. It is intended to counteract the destructive overexploitation of agricultural land and soil degradation. In order to expand the transport infrastructure, Germany has been supporting the maritime sector since 2003 and helping to improve passenger and freight traffic. The Berlin-Nakroma ferry, financed by Germany, connects the capital Dili with the enclave Oecussi in West Timor and the island of Atauro. In 2011, Germany agreed to support the procurement of a second ferry. It should be used in 2021.

Since 2008 there has been a focus in bilateral cooperation on the area of ​​peacebuilding: the young state is supported in overcoming the causes of conflict, violence and fragility. The focus is on promoting employment. The measures include strengthening labor market mechanisms and the role of cooperatives. They aim to improve rural development and the transport infrastructure and promote the sustainable use of agro-biodiversity to secure livelihoods. The measure “Peacebuilding, Youth Promotion and Fighting Corruption – Peace Fund” supports state and non-state partners. Germany is thus making a contribution to the social and economic development of Timor-Leste.

In dealing with the troubled past, Germany supports individual projects of the National Truth and Reconciliation Commission CAVR, such as the publication of the final report Chega! in Indonesia and an exhibition on the 1974-1999 conflict in the Commission building, the old Comarca prison in Dili.

The Center for International Migration and Development (CIM) sends specialists to Timor-Leste who work at the state level in the areas of maritime transport, economic development, rural development and youth and sport promotion.

In the most recent talks between Germany and Timor-Leste in November 2017, the country was pledged 7.44 million euros for development cooperation. The “BMZ 2030” reform concept presented in 2020 no longer provides for a bilateral partnership with Timor-Leste.

According to internetsailors, political foundations do not have their own offices in Timor-Leste. The Konrad-Adenauer-Stiftung (KAS) provides information on political developments and is committed to promoting the party-political system. It maintains a collaboration with the Partido Democratico (PD) and the Conselho Nacional de Reconstrução de Timor (CNRT). The Friedrich-Ebert-Stiftung (FES) ran programs for the political education of journalists, human rights groups and trade unions, based on its office in Jakarta.

AGIAMONDO supports civil society organizations in Timor-Leste by sending experts from the Civil Peace Service. MISEREOR has been active in East Timor since 1977. The episcopal aid organization supports the development of civil society and promotes the training of young people, the vocational training of young women and teacher training through local partners. Also missio Aachen helped the local church of East Timor long before independence in the field of education and, together with other organizations and organizations, publicly advocated the rights of the East Timorese people. The Salesians of Don Bosco have been working in East Timor since 1948, where they maintain schools, vocational training and youth centers. They also offer young adults the opportunity to do voluntary service there. The focus of the promotion of Kolping International lies in the area of vocational training. Since 2001 the children’s aid organization Plan International has been involved in the areas of education, health and peace. With the support of the European Commission, World Vision Germany maintains a project for food security in Baucau, Bobonaro and Dili. The Order of Malta is active in rebuilding the medical infrastructure. After the unrest of 2006, the Jesuits in Timor-Leste increased their commitment to unifying cultural values and the promotion of identity. The Casa de Produção Audiovisual (CPA) produces, among other things, television programs to strengthen national unity and peace, and the Order maintains schools and a training center for teachers.